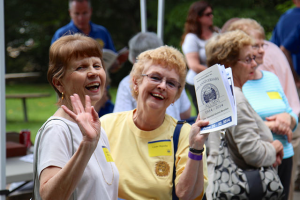 Every three seconds, an adult with osteoporosis breaks a bone.

If it sounds like a dramatic statistic, that’s because it is. More than 10 million Americans struggle with osteoporosis and more than half the U.S. adult population over 50 is affected by low bone mass—a number that’s expected to grow 29 percent between 2010 and 2030.

While it’s natural to lose bone density as we age, for some of us the loss comes with an increased risk of fractures. Despite the prevalence of the disease, which affects 54 million people, many sufferers don’t know they have it until they break a bone—most commonly the spine, hip, or wrist.

Ultimately, half of women and a quarter of men over age 50 will endure a fracture due to osteoporosis. In 2016 alone, the disease will cause 2 million broken bones and an estimated $19 billion in related costs. Complications can range from repeat fractures to death; one in five seniors who break a hip die within one year from related problems.

When caught early, osteoporosis can be treated. Medications that reduce bone loss or stimulate growth can help reduce the risk of a broken hip by 40 percent and other fractures by 15 to 70 percent.

To catch osteoporosis in its early stages, doctors use a special X-ray to measure the density of calcium and other minerals in your bones. The three main types of bone density tests include:

This method involves directing two X-ray beams at the spine and hip.

Density is measured by the amount of radiation blocked by bone and tissue. It’s both fast and accurate, with the ability to measure as little as 2 percent of bone loss per year.

With this test, dual beams are directed at the arms or legs instead of hips and spine. Because the equipment is portable and has the shortest scan time, this method is often used as an initial screening to determine if a central DXA is needed.

This test involves using radioactive photon beams to measure bone density in the hips and spine. Of all the available tests, it has the longest scan time.

A visit to your family practitioner can help you understand whether a bone mineral density test is right for you.

Who Should Get Tested?

Adults with the highest risk of osteoporosis, including: women, seniors age 65 or older, people with small or thin frames, and those who are related to an osteoporosis sufferer. Women can lose up to 20% of their bone mass in the five to seven years following menopause, making them more susceptible to osteoporosis.

For adults with normal to mildly low bone density, doctors recommend getting retested every 15 years. Those with moderate to advanced bone loss should have their bone mineral density monitored annually.

Osteoporosis takes a huge toll on the quality of life for millions of seniors. By seeking help from a family practitioner, adults in Portland can start combating the effects of bone loss and enjoy a healthier, more active retirement.

Photo by daveynin via CC License