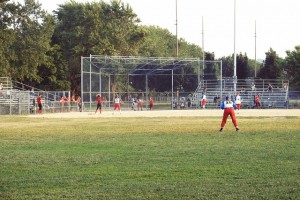 As the sun lures kids of all ages outdoors, millions of young baseball and softball players across the nation are warming up their throwing arms for another season of ballgames.

High school participation in throwing sports has risen over the past 20 years, with more than 11 million baseball players competing at the high school and club level. In 2013, baseball was the third popular sport for high school boys, softball the fourth for girls.

With the increase in popularity comes a rise in shoulder and elbow injuries during baseball season, which is now in full swing. Repetitive throwing, when combined with muscle tightness from rapid bone growth, “may place the adolescent athlete at increased risk of upper extremity injury,” says the International Journal of Sports Physical Therapy.

Portland athletes most at risk include baseball pitchers—who suffer the worst injuries resulting in the most missed days of practice—and softball position players, who have the highest shoulder injury rates (along with baseball pitchers). While some athletes are at greater risk than others, injury can strike regardless of age or level of competition.

Many of the injuries that plague baseball and softball players stem from arm overuse. Young athletes often play multiple positions and play on more than one team a year, elevating their risk of arm fatigue and related injuries.

Too much throwing can damage the:

Shoulder. This represents the most frequently injured joint among baseball and softball players. Repeated throwing can inflame the rotator cuff or tear the cartilage around the shoulder socket—an injury that afflicts nearly 20 percent of high school baseball players, who are 1.4 times more susceptible than junior high players. Shoulder injuries often manifest as changes in range of motion, decreased muscle performance and poor neuromuscular control.

Elbow. This joint ranks second for throwing injuries. Nearly 30 percent of young pitchers suffer from elbow pain, known as “Little League Elbow”—a term encompassing most elbow problems reported by adolescent ball players. These injuries often rear up after a dramatic increase in training volume or intensity and can result in reduced throwing speed, accuracy problems, and lack of grip strength. Some may cause acute motion loss and pain during extreme elbow movement.

The following symptoms could indicate a throwing injury. Consider seeking physical therapy if your child exhibits the following:

Treating young athletes can be challenging, as they often get hurt during or just after a growth spurt, says the International Journal of Sports Physical Therapy. When throwing injuries occur, the most effective treatment usually involves some form of physical therapy, Portland doctors agree.

A physical therapist can help young baseball and softball players:

Regain muscle performance. By stretching and strengthening the arm and shoulder, physical therapy helps relieve symptoms, promote healing and prepare the athlete for re-entry into the sport. Participation should resume only when they symptoms abate and muscle performance has rebounded.

Prevent re-injury. Returning to the ball field too soon can increase the chances of re-injury. A physical therapist can guide the process in a way that promotes long-term athletic performance. They can also identify athletes who are most prone to re-injury and monitor for risk factors such as:

For young baseball and softball players, arm injuries are common but treatable with physical therapy. Portland sports medicine experts can recommend the best course of treatment, along with further information on how to prevent throwing injuries.