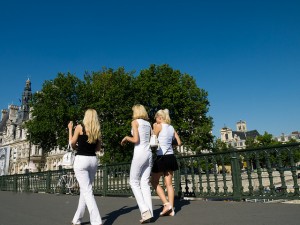 Do you know which disease poses the biggest threat to women’s health?

Here’s a hint: It’s not breast cancer, which claims one out of every 31 American women each year. (In fact, the disease we’re talking about is more dangerous than all forms of cancer combined.) Nor is it stroke, which ends fewer than 6 percent of female lives annually.

If you guessed heart disease, you’re right. An estimated 43 million women in the United States are affected by cardiovascular disease. In fact, one out of three women die of heart disease each year—that’s one per minute, according to the American Heart Association.

If you didn’t guess correctly, you’re not alone. Awareness of heart disease in women has more than doubled since 1997. However, only one in five American women believes this is her biggest health threat, while more than 40 percent of the population still think cancer is the leading cause of death in women.

To help bridge the gap in women’s cardiac care, Portland doctors emphasize the importance of understanding how this disease shows up differently in women than in men.

The issue of knowing about the dangers of heart disease in women is the lingering perception that this problem primarily affects men—after all, women comprise only 24 percent of participants in all heart-related studies.

Another problem is that women often misunderstand the symptoms of heart disease, which can be different in women than in men.

Most people recognize chest pain and pain radiating down the left arm as telltale signs of a heart attack. But many women experience silent symptoms that can easily be misconstrued as harmless. These can include:

The good news about heart disease is that four out of five heart attacks and strokes can be treated or prevented simply by learning what puts women at risk and taking steps to fight it. That’s why, when providing women’s cardiac care, Portland doctors recommend a risk assessment to find out what your danger areas are.

Ninety percent of women have one or more risk factors for heart disease, such as:

While some of these factors are uncontrollable—like the fact that women are more likely to get heart disease after menopause, when the body’s estrogen production dips—many of them can be changed.

It doesn’t have to happen overnight. Tackling the changes gradually, one by one, can be an effective approach to combating heart disease. The important thing is that women get started today.

Northwest Primary Care offers state-of-the-art cardiac monitoring and testing, a wide variety of patient healthcare resources, multiple locations to serve the community making it easy to find a doctor near you and much more. Learn more about our cardiac specialty care here.